We heard about the Pines fire on the news. We were concerned, but not too much. After all, it was all the way up in Julian. Not close at all to Ranchita. It started on Monday, July 29th. By the end of that week, we were getting concerned. It was spreading rapidly and even though the reports kept saying that containment would happen within a few days, it wasn't to be. At the end of that week, the fire had jumped the line and was headed towards Ranchita.

Saturday, August 3, 2002, we were on our way home from the CostCo Warehouse in Santee, when we saw the plume of smoke from the freeway. We went home, grabbed the camera and drove to the top of a nearby hill and I took pictures. This is about forty five miles from Ranchita, as the crow flies. 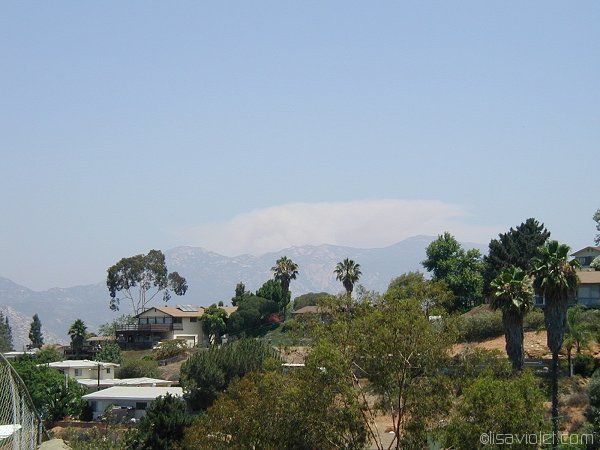 That night, after watching the news, Brian and Mark decided to go up to the property, to see if there was anything they could do to protect what we had. The roads were blocked, though, and they were turned back.